Hassnaa (36): “My children are my happiness” 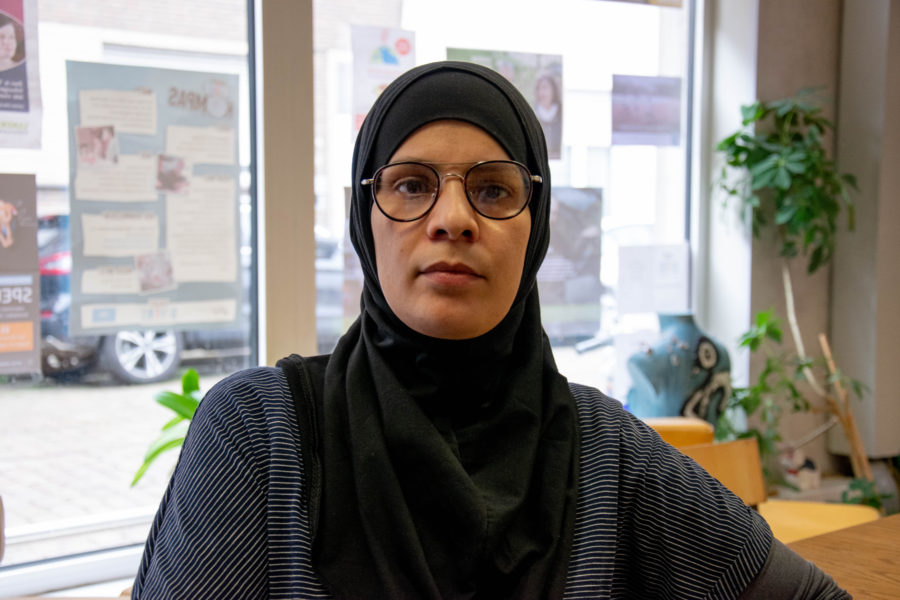 “I was born in Morocco, as the youngest. All of my siblings were born in Belgium, but my parents went back to Morocco where they had me. Shortly afterward my mother took my brothers and sisters to Belgium, while my father and I stayed behind. He died when I was 16 years old, and then my mother took me to Belgium. I didn’t eat for the first two weeks. I told my mother I just wanted to go back. But I got used to it after a year, made new friends and started to understand the language. However, I still miss the days in Morocco. I call myself Moroccan with a Belgian nationality.”

“Shortly after I met my man in high school and moved in with him, I got pregnant. I was seventeen years old. My mother was scared, she didn’t expect me to have a child that early. I stopped going to school, even though she said no because it was mandatory until the age of eighteen. Sometimes I regret it, asking myself ‘Why didn’t I finish studying?’ But what happens, happens.”

“We’re going to move to London soon, it’s a really big step. I think about it every day. I’ve been here for twenty years, it’s not easy to leave. I actually really don’t want to, but my children do. They have been asking to move to England for eight years, and I kept saying that we would do it the year after. Finally, I said yes.”

“If it doesn’t work out, we’ll come back. Then at least we tried, and I don’t have to feel guilty that we didn’t go. But if my children are happy there, or even happier than in Belgium, we’ll stay. Even if I don’t like it. I’m not going to lie, it’ll hurt a lot, but my children come first. I say that everything is okay, but I actually break my head thinking if it’s the right step to move. I’m really afraid. Everyone else of my family is here. I see my sisters every day, but in England I’ll be alone. My sisters cry when I talk to them, asking how I can do this. But they promised that if it works out for me, they will fly to London every weekend.”

“I’ve been a volunteer at Filet Divers since 2015. My sister worked there, and asked me to come drink some coffee. I met Bernice, who works there too, and she asked to come work with them. She told me to try it out for a week. After two weeks I decided it was something for me. It’s nice and full of warmth, it feels like family. I’ve worked at many different places, but it’s never been like Filet Divers.”

“I love all of my family. My father is still number one, even though he died. My children know that when they ask who I love the most, I will say my dad. He was really very sweet. On the second place are my children. Third place, my man. Fourth place, me. Sometimes, when I’m home alone, I wonder: ‘Why don’t I choose for myself?’ It’s okay though, I try my best. My children are my happiness. If they’re happy, healthy and safe, then I’m happy.”

“I used to feel at home in Antwerp, but I don’t anymore. To feel home I have to feel safe, and it’s not safe anymore. In the city center there are a lot of problems, a lot of people using drugs, definitely around the Astridplein. It used to be so nice there, but not anymore. I used to live behind the De Coninckplein, but I sold my house and moved to Merksem. Two young guys were killed in front of the door of my sister, who lived next to me. That’s when we left, because it became too unsafe. Not all of Antwerp is bad though. There’s an Arabic saying: ‘If one fish in a tub of fish stinks, people will smell it and say all of the fish stinks’. But that’s not true. Now in Merksem, I do feel safe and at home. Everyone respects each other. People are friendly and everyone says hi to you, even if they don’t know you.”

“To all young girls, I want to say: it’s best to not have children until you graduate school and get a job. That’s really important. That way, you’re stronger. If I hadn’t had children, I may not have been speaking here now. I might have had my diploma then. I want my daughters to become better than me and not go into the same direction.”

Describe yourself in three words. “Sweet, friendly and sensitive.”

Which song do you never get tired of? “I have no specific song, but I love listening to Indian music. It’s all I listen to. Ever since I was 16 and still in Morocco, I started watching Indian Bollywood movies a lot and loved the music. My kids get tired of me playing it all the time.”

If you could be anything in the world, what would it be? “A bird. They can always fly. I can go anywhere I want, they always fly. If I get tired of a place, I can go somewhere else. Nobody could stop me, because I’d be able to fly.”

What would you do if you won the lottery? “First I would pay off my credit, and then I would create an organization for poor people. With food, clothing, and such. There are people who need it, here in Belgium as well. There are people that can’t have lunch if they have breakfast, or can’t have dinner if they have lunch. I want to help those people. In the future, I actually want to start that organization in Morocco. There, I have a piece of ground from my father that I want to use.”